The first Fields of Gold held on the site was in 1999. Tewl spent a couple of weeks cleaning up an overgrown clearing and had a backhoe dig the first outhouse hole down at the bottom of the common. A group of school kids came through from Burns Lake; they got to hit a fighter, write their name using a quill and had a great time. On the site hand-out it was noted that if there was an area that was not to your liking, there were axes, shovels etc. for your own personal use.

After that event weekend Wlfryd asked about building a platform on the site of the Red Wolf Inn (as he and his family had rolled to one side of the tent during the night).  Tewl donated some 2x4s and plywood and the first on site building was begun.  The first buildings were the end rooms of the Red Wolf Inn, which were connected by a platform that Wlfryd put his tent on. Next was a platform for a 9’ x 12’ tent; it eventually became the base for the Saxo 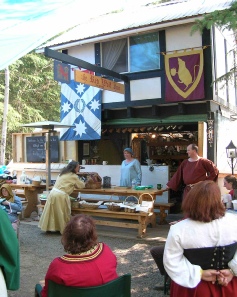 n hut. In the early days the gatehouse was a Costco garage that also served Betha & Tewl as a shop/home at Clinton and other large events.  A real gatehouse was built after a heavy snow exploded the Costco legs under the snow load.

As the event started to grow, a second washroom was built and when Wlfyrd's tent started to leak he asked if he could build something more permanent. The Red Wolf Inn has since grown from the main building and end units to platforms out back and additional adjoined “rooms.”  The whole idea around the development of the inn was that people travelling from the Lower Mainland only had to bring garb and armour.  That would allow more people to travel north per vehicle as they would not have to bring pavilions.  The Red Wolf Inn went through a major refit about six years ago to install a second floor, water storage and a gravity fed shower with both hot and cold running water.  Wlfryd and Rhiannon continue to improve the Inn and can often be found on site on long weekends and through the summer.

Current buildings on the Fields of Gold Educational Centre include: the Gatehouse/infirmary, with a wall that becomes a roof when opened; 3 outhouses (1 wheelchair accessible); a 12’ X 24’ Carpenter’s shop; the bake pit (which will have a roof and stone oven); the Saxon hut; Shrew'd Apparel; the Red Wolf Inn; the Ca' Gryffano Palazzo; the Enchanted Tree Children’s area; the archery and thrown weapons ranges; the O'gur platform; Wlfryd’s Wine Shoppe and vineyard; a bardic courtyard; the Russian and Norman tent platforms; the Royal box and the Eric. The bailey wall will continue to expand and will hopefully be another 40' longer before it turns this year and eventually encircles the Educational Centre. 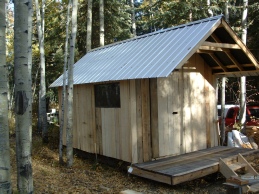 Buildings under construction or in the planning stages include: a Gold Key building and storage; merchant’s stalls (with apartment above); a cordwood log rounds and mortar house; a Norse sod house; a Scottish stone croft; the mint; the armoury; showers; a temple (which will be constructed using only period methods and will serve as the site library); the feast hall; the blacksmith’s forge and whatever buildings people wish to build that fit into our loose regulations.

Wlfryd does a one hour walking tour of the site which includes stories about the two legged tree and the silver dragons that spit red fire and burn houses on Wakefield road.  Other tales on the tour include anecdotes from Bill and Lisa’s wedding, with the construction of th 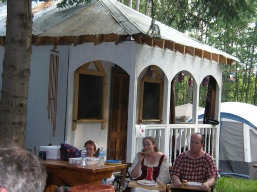 Future plans for the site include a full fledged medieval village with numerous activities and educational opportunities.  We hope to begin to take advantage of the Royal Proclamation and Sanctuary to host Kingdom events, an annual Medieval Faire and University of Tir Righ workshops during a week long summer event. 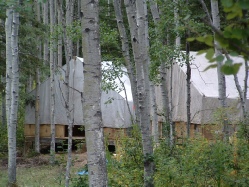 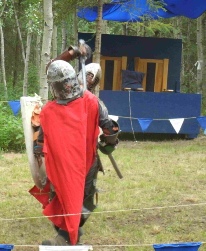